Views on the Gladbach game

Theodor Gebre Selassie expressed his frustration at the loss after the game (nordphoto).
First Team
Tuesday, 19.01.2021 / 21:24

Frustration at the narrow defeat on Tuesday evening against Borussia Mönchengladbach was palpable amongst Werder’s head coach Florian Kohfeldt and his players. Florian Kohfeldt described the loss as “very annoying” following the final whistle, while Theodor Gebre Selassie and Romano Schmid called the 1-0 scoreline “an unfortunate, bitter defeat”. It was clear that the “unnecessary goal conceded” alongside several golden opportunities was the cause of the frustration as the Green-Whites finished the first half of the season with 18 points.

Nico Elvedi netted the only goal of the game with a glancing header (nordphoto).

Theodor Gebre Selassie: “We did a good job for long periods, we were stable in defence, and we created chances. We had enough chances to score, but we just could convert them. I was certain we’d equalised with Milot’s chance but it wasn’t to be. We were well-organized as a team and didn’t allow them many opportunities, but in the end we were punished for being toothless in front of goal, which is a bitter feeling.”

Kevin Möhwald: “It’s a defeat that’s difficult to accept. We shouldn’t be conceding goals like that. We had some great opportunities, especially on the counter. We were the better team with the ball in the second half, and for periods in the first half too. After the first half, we thought we would be able to take something from this game but we haven’t managed that in the end which is disappointing.”

Romano Schmid: “It’s definitely an unfortunate goal to concede. It’s always unfortunate to concede on set pieces. We had so many chances and hit the post at the end, plus my shot in the first half plus Josh and Felix’s chances. We just couldn’t put it in the net.”

Felix Agu: “It’s an annoying defeat. Our plan was to keep it solid at the back and build on that going forward. We did that well and created a lot of chances. If we’d made use of them we’d be standing here saying the plan worked perfectly again. It’s even more frustrating that we lost to a set piece goal.”

Florian Kohfeldt: “It’s a very frustrating loss. We had the better chances over the course of the match, even though we might not have been the better team overall. We deserved a point at least, so I’m annoyed at that. We were better in terms of chances against one of the league’s top teams, but we didn’t get any points, which is what matters”.

On the goal conceded:

Kevin Möhwald: “We’ve shown over the past few weeks that we can defend set pieces better. It’s a low ball into the box and we have to be able to deal with that. That’s why we’re so angry at ourselves.”

Theodor Gebre Selassie: “We weren’t in the right positions to defend a free kick like that. We have to communicate better so we don’t leave big holes in the defence like that. It was just unnecessary.”

On the first half of the season: 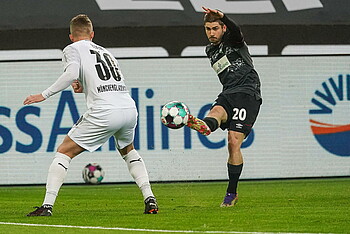 Romano Schmid had the best chance of the first half (nordphoto).

Kevin Möhwald: “We would have liked to have taken one or two more points, that’s for sure. We still have a lot of work to do. It’s important that we win the games like we did on Saturday, but I thought we were an unpleasant opponent again today. We played with a lot more bravery than we were doing in the weeks before that. It should give us a boost as we head into Saturday’s game.”

Theodor Gebre Selassie: “Our points tally could be a bit better, but we’ve learned a lot from last season. We’re more consistent and solid. We knew it would be a tough season and it has not been easy so far. We have to keep working hard to pick up points.”

Romano Schmid: “In my eyes - excluding the Union game – we’ve been on an upward trend over the last few weeks. We can take a lot from these games.”

Florian Kohfeldt: “The club was in a difficult financial situation in the summer, and we still are to an extent. We can’t do a great deal of sporting planning; we’re just adapting to the current circumstances at the moment. It’s the path we’ve decided to take, and we’ve done a good job at finding young players like Felix Agu, Manuel Mbom and Romano Schmid who have made their way into the first team. We’ve also started to rebuild the team to an extent. We had a difficult start because we didn't know how these players would react at Bundesliga level, but they’ve found their feet well. We’ve missed a few big players through injury. Overall the first half of the season has been solid under difficult conditions, but we’re still not that far from the bottom. We have to defend that gap, but I’m confident we can do it.”

“I flew under the radar a bit during my youth ca ...

"I want to iron out the inconsistencies"

Baumann: “We completely understand the decision”

01.03.2021 / First Team
Your web browser ist outdated.
The web browser you are using is no longer supported.
Please download one of these free and up to date browsers.
Why should I use an up to date web browser?